I’d been getting impatient with myself for taking far too long settling on a project for my latest Scheepjes Whirls. Each being a whole kilometre of yarn, they demand quite an investment of time so it has to be right!

Now, I reckon the most talked about knitting pattern of 2017 was the ‘Read Between the Lines’ shawl by Tammy of the fantastic Canadutch blog. When the crochet version (CBTL) was released recently, I decided this was definitely the one for me. Coincidentally, when I got to Knit and Natter (crochet allowed too!) a friend had just started it and was finding it a little tricky. So I decided to hold back for a while and have a go at something else while observing how she got on.

There’s a great Facebook Group called Scheepjes Whirl Creations! It’s the perfect place to look for inspiration and to see how all the different colourways hook up. However because the Whirls lend themselves so well to beautiful shawls, they dominate the posts. If I was going to do the CBTL in future, I wanted something other than a shawl.

On the Scheepjes website I found a pattern for something a bit different – Wild Forest Cushions by Esme Crick. Decision made. Next came the business of pondering whether to work from the insides or outsides of each Whirl, which to use for bobbles and which for background. That’s the addictive thing about Whirls – so many possibilities! 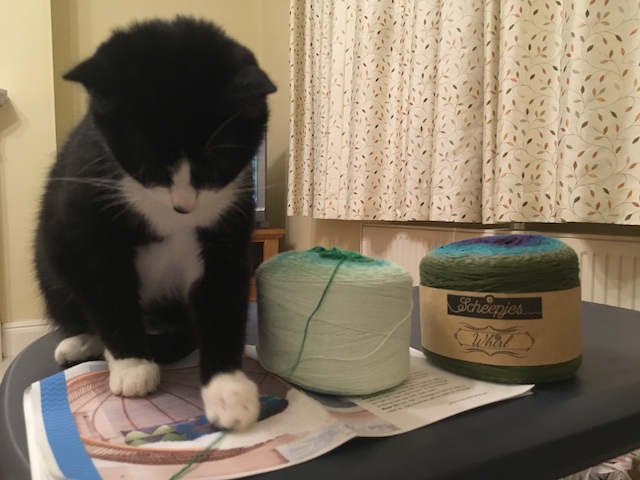 With the ‘help’ of my furry tension keeper, I got cracking. The bobble stitch was new to me but I picked it up straight away.

The pattern is very simple but it does take a little concentration to make sure you get your bobbles in the right place. You work them on the reverse and I quickly learned to turn over every so often to check that they were lying between the bobbles of the row below. The second row of bobbles is the crucial row. Once you’ve nailed that, it’s plain sailing. Here’s how it’s looking front and back. 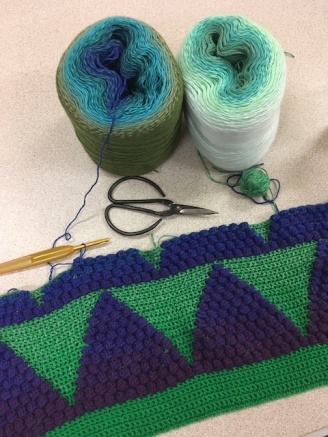 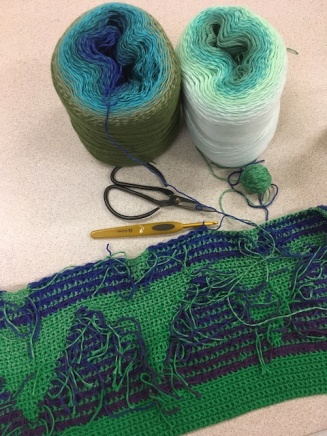 Let me urgently point out, because that photo on the right may be giving you cold sweats,  YOU DON’T HAVE TO SEW THE ENDS IN! That’s right, you just knot tightly, (the yarn holds it just fine) trim the ends and carry on. Also note, that I have tweaked the pattern. I am doing four rows of triangles instead of two to make a square cushion and backing with fabric because I want all my bobbling efforts on show. I’m also winding on the yarn in between some of the colour changes because I want to see whole range of shades. This does mean I’m being left with little amounts of yarn but these will be used for a second cushion. I’m intrigued to see how it will end up!

Under the guise of stashbusting, I’ve also joined in the ‘Hook ‘n Learn’ blanket crochet-a-long which started in this month’s Simply Crochet magazine. The idea is that you learn a new stitch every issue and at the end of the year, join the pieces into a blanket. This is a lovely way to make use of stitch samples as you learn. 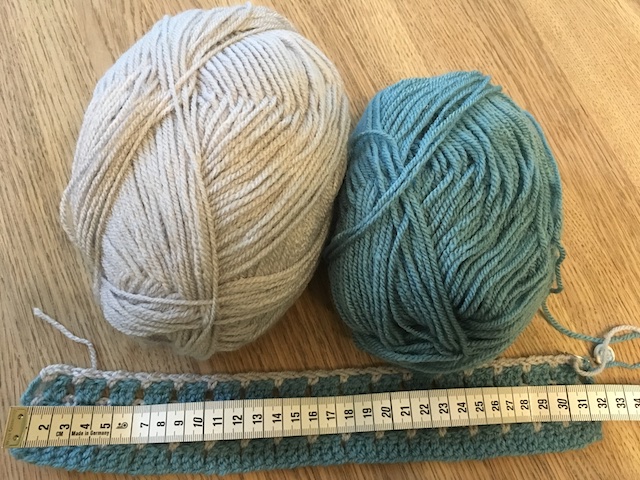 Tension is really important when you’re attaching blocks together. It took me a few attempts to get the right size. My first was way too small. I went up a hook size and it was way too big! I reverted to the original and worked with loose tension and it was just right. Do I sound like Goldilocks? 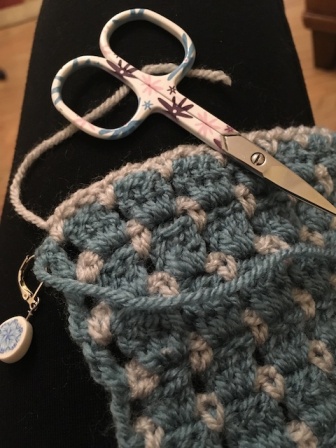 I subscribed to the magazine under their offer, so was sent a 9-ball bundle of Scheepjes Colour Crafter. Added to the same yarn from my stash, I have enough to do a few blocks of each stitch to make a larger blanket that will be my own colour combination. 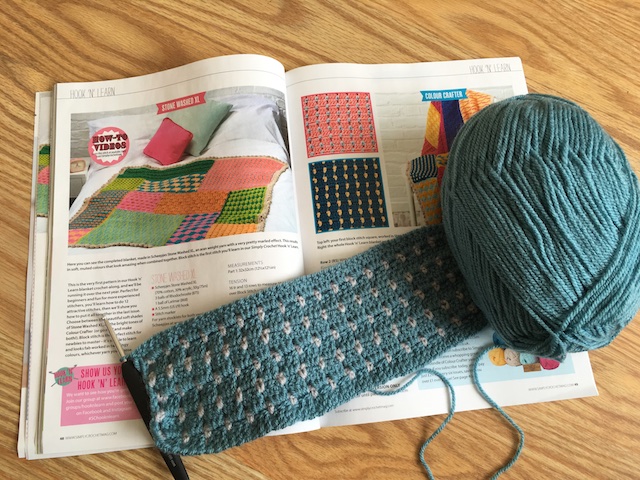 Again there’s a Facebook group hooknlearn. This is great for support if you get stuck and there are photos appearing on Instagram #SChooknlearn of blocks completed and in progress. Video tutorials of each stitch are on youtube so the blanket is truly beginner friendly. I found the magazine instructions clear enough on their own and had no problems with the stitch. I could just about make my square with one eye on Netflix. I may have worked a couple of the even rows on the wrong side by mistake during a particularly tense episode of Homeland – but no worries, it’s not that noticeable and I can genuinely say I have learned.

View all posts by bizzymitts

One thought on “What’s Hooking?”